– BELGIAN PROJECT IS UNIQUE IN THE WORLD

Gembloux/Antwerpen, 7th of september – Brewery L.Huyghe, known for its sustainable ambition, is the first major Belgian brewer to commit to Belgomalt’s Pure Local project. Belgomalt is a subsidiary of Belgium’s Boortmalt, the world leader in malt. The brewer just placed an order for 200 tons of Pure Local malt, good for about 2.5 million glasses of Delirium beer. Pure Local is the only project of its kind in the world. It connects committed Belgian farmers with local brewers. Thanks to the principles of regenerative agriculture, the cultivation of the grains is CO
2-neutral or even negative.

Over the past 30 years, the cultivation of malting barley, the basis of malt, has declined sharply in Belgium. Today, less than 3% of malting barley comes from Belgian fields. Our malting plants get most of their barley from France, Great Britain or Scandinavia. The connection with the local farmers has therefore almost completely disappeared. And this at a time when the craft beer scene is in full bloom, as more and more microbreweries and hobby brewers are popping up.

BACK TO THE BELGIAN FIELDS

Belgomalt, a subsidiary of Boortmalt, wants to change this with the Pure Local program. This brings the cultivation of malting barley back to our own fields. The farmers grow the grains according to the principles of regenerative agriculture. By ploughing less or not at all and ‘sealing’ fields between crops with ground cover, they manage to store carbon from the air back in the soil. Result: CO-neutral and even -negative barley. Pure Local guides the entire process, from soil analysis to sowing, harvesting and follow-up. And the Pure Local farmers can count on a fair price.

“By choosing to supply local malt that is also cultivated in an environmentally friendly way, Brouwerij L.Huyghe is an example of how things can be done differently. It gives a clear signal that brewers and beer drinkers are willing to contribute to local and green efforts. We hope that more breweries will follow this example.”, says Alexander Hendrickx, representing Belgomalt.

FIRST BIG BREWER ON BOARD

Brewery L.Huyghe is the first major Belgian brewery to step into the Pure Local project. The order of 200 tons of Pure Local malt is equivalent to brewing some 2.5 million glasses of Delirium beer. Besides the Delirium Tremens, Brouwerij L.Huyghe is known for numerous other quality beers; from the Averbode abbey beer, the Mongozo gluten-free beers, the Sint-Idesbald abbey beers and many others. Recently they won 4 medals during the prestigious World Beer Awards (WBA).

“As a proud family brewery, we want to secure the future for future generations. It is our ambition to become the most sustainable brewery in the country”, ays CEO Alain De Laet, the 4th generation of Brouwerij L. Huyghe. 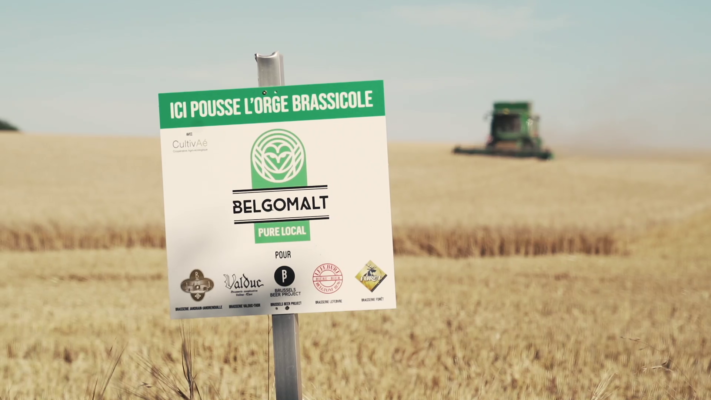 Boortmalt is the world’s largest malt producer with a production capacity of 3 million tonnes. The group is present on 5 continents with 27 malt houses. The head office is located in the port of Antwerp where the world’s largest malt house is also located. Boortmalt’s expertise is widely recognised by brewers and distillers who rely on the supply of top-quality barley malt. Belgomalt is a Boortmalt subsidiary brand catering to the needs of Belgian craft brewers and whisky distillers. With a clear focus on local green farming and innovation, Belgomalt occupies a unique position in the market.

The family brewery L.Huyghe was founded in 1906 in Melle, East Flanders, by Leon Huyghe. The brewery is known for the iconic pink elephant and grey bottle of its flagship beer, the Delirium Tremens. 87 percent of its turnover is destined for export to more than 100 countries worldwide. In addition to the well-known Delirium beers, the company also brews Averbode abbey beer, Mongozo gluten-free beers, Sint-Idesbald and many other beers. Thanks to its constant innovation and development, Brouwerij L.Huyghe is known as a sustainable and green brewer.